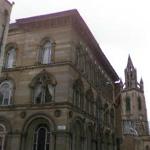 By kkeps @ 2011-09-10 11:11:06
@ 53.407558, -2.993895
Liverpool, United Kingdom (GB)
Hargreaves Building is a former bank in Chapel Street, Liverpool, Merseyside, England. It originated as the headquarters of the Brown Shipley Bank, continued as offices when the bank moved to London, was converted for use by the Liverpool Racquet Club after the Toxteth riots, and later became a hotel and restaurant.
Links: en.wikipedia.org
374 views