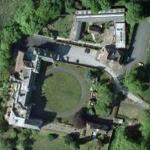 By kkeps @ 2010-10-15 19:36:32
@ 52.33919, -2.240835
Stourport-on-Severn, United Kingdom (GB)
Hartlebury Castle in Worcestershire, central England, was built in the mid-13th century as a fortified manor house on land given to the Bishop of Worcester by King Burgred of Mercia. It lies near Stourport town in north Worcestershire. The manor of Hartlebury belonged to the bishops of Worcester from before the Norman Conquest. The castle was thus one of the residences of the medieval bishops and their principal residence in later periods.

From the early 13th century until 2007, Hartlebury Castle was the residence of the Bishop of Worcester. With the coming of a new Bishop, Bishop Inge, the residence was moved to a house adjacent to the Cathedral in the city of Worcester itself.

The future of the rest of the historic building (including the Hurd Library, a special gallery built by Bishop Hurd in 1782 and which still contains his extensive and unique collection of books) is at the present time (May 2008) uncertain.