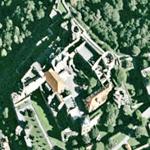 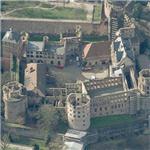 By kjfitz @ 2007-06-17 13:54:26
@ 49.41073, 8.715857
Heidelberg, Germany (DE)
The castle is a mix of styles from gothic to renaissance. Prince Elector Ruprecht III (1398 - 1410) erected the first representative building in the inner courtyard as a regal residence. The building was divided into a ground floor made of stone and framework upper levels. . Another regal building is located opposite to the Ruprecht Building: The Fountain Hall. Prince Elector Philipp (1476 - 1508) is said to have arranged the transfer of the hall's columns from a decayed palace of Charlemagne to Heidelberg.

In the 16th and 17th century the Prince Electors added two representative palace buildings and turned the fortress into a castle. The two dominant buildings at the eastern and northern side of the courtyard were erected during the rule of Ottheinrich (1556 - 1559) and Friedrich IV (1583 - 1610). Under Friedrich V (1613 - 1619), the main building of the westside was erected, the so called "English Building".

The Castle and its garden were destroyed several times. ( during the 30 Years' War and the Palatine war of succession. When Prince Elector Karl Theodor who resided in Schwetzingen tried to restore the castle, lightning struck the Castle in 1764 and finished all attempts to rebuild the castle. Later on, the Castle was misused as a quarry - castle stones helped to build new houses in Heidelberg. This was stopped in 1800 by Count Charles de Graimberg who made any effort he could to preserve the Heidelberg Castle. In spite of its Gothic interior, it was not before 1934, that the King's Hall was added.