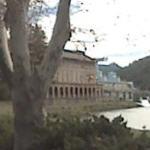 By kjfitz @ 2010-04-21 10:14:01
@ 37.811034, -120.301223
Moccasin, California (CA), US
A company town, Moccasin is entirely owned by the City and County of San Francisco. Homes are used for employees who work on the Hetch Hetchy Reservoir system. Most buildings are painted the same color and homes in the community look similar as a result. There are no stores or gas station.

Construction on the original Moccasin Powerhouse was started in Fall 1921. The facility was completed and began generating power on August 14, 1925.

The present-day Moccasin Powerhouse, was completed and placed in operation January 27, 1969. The facility's rated capacity is 100,000 KVA and there is a second 3,000 KVA generator called Moccasin Low Head Generating Plant, (completed 1986). The town site is a significant facility along the Hetch Hetchy Aqueduct system.
Links: en.wikipedia.org
1,633 views