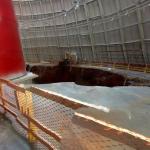 On February 12, 2014, a sinkhole opened under the floor of the Skydome area of the museum at around 5:44 AM local time, causing a portion of the floor to collapse. Eight rare and one-of-a-kind Corvettes, portions of the display stands and rails, large concrete floor slabs and dirt fell into the sinkhole, causing serious damage to some of the Corvettes.
Links: www.usatoday.com, en.wikipedia.org
426 views