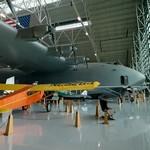 The aircraft made its first and only flight on November 2, 1947, and the project never advanced beyond the single example produced. Built from wood because of wartime restrictions on the use of aluminum and concerns about weight, its critics nicknamed it the "Spruce Goose," despite it being made almost entirely of birch rather than spruce. The Hercules is the largest flying boat ever built and has the largest wingspan of any aircraft in history.