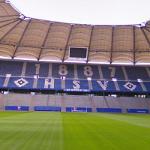 By neotrix @ 2010-11-02 00:54:34
@ 53.586676, 9.89834
Hamburg, Germany (DE)
Volksparkstadion is a football stadium in Hamburg, Germany. It is the home ground of Hamburger SV and was one of the 12 stadia used in the 2006 Football World Cup, which hosted four group games and a quarter final. Through a sponsorship deal the stadium is officially named Imtech Arena, and has previously been called the AOL Arena and HSH Nordbank Arena for similar reasons. Due to UEFA regulations on stadium sponsorship, the stadium is referred to as the Hamburg Arena for European matches.
Links: en.wikipedia.org
1,003 views