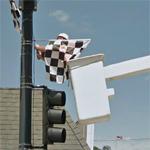 Each year, the population of the town triples during two National sprint car racing events held during the first two weekends in August. The 360 (cubic inch engine) Nationals are held on the first weekend, followed by the four-day-long main event - the Knoxville Nationals, which attract about 100 of the best 410ci sprint car teams in the world. Many fun events are held in the city during these two weeks.

A city worker is seen putting checkered flags on the downtown light poles weeks before the big races are held.
Links: www.youtube.com
394 views