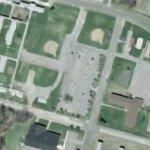 By gamma @ 2008-04-05 18:26:10
@ 41.49953, -74.107246
Newburgh, New York (NY), US
Stewart International Airport (IATA: SWF, ICAO: KSWF) is located near Newburgh, New York, in the southern Hudson Valley, 55 miles (88.5 km) north of New York City. Originally developed in the 1930s as a military base to allow cadets at the nearby United States Military Academy at West Point to learn aviation, it has over the years grown into the major passenger airport for the mid-Hudson region and continues to serve as a military airfield as well, currently housing the 105th Airlift Wing of the New York Air National Guard and Marine Aerial Refueler Transport Squadron 452 (VMGR-452) of the United States Marine Corps Reserve. The space shuttle could also land at Stewart in an emergency.
Links: en.wikipedia.org
1,404 views

skyeye
@ 2010-10-02 19:03:13
The alteration becomes more obvious when one zooms in. The surrounding area has good resolution, but the field and military area are diffused. Birds Eye View works for everything but the airport. What's being hidden?