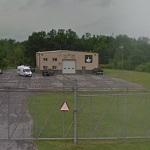 By giove @ 2012-01-05 06:46:39
@ 41.530282, -74.134117
Rock Tavern, New York (NY), US
Paul Michael "Paulie" Teutul (born October 2, 1974) is one of the stars of the American reality television series American Chopper. He co-founded Orange County Choppers (OCC) with his father, Paul Teutul, Sr. in 1999. Teutul was the chief designer and fabricator of OCC. Prior to this, Teutul was head of the rail shop at Orange County Ironworks. He was also responsible for designing the logo for OCC. He is the owner of Paul Jr. Designs, which manufactures custom motorcycles and sells branded clothing.

Teutul, along with his father and younger brother Michael Teutul, became celebrities when Orange County Choppers became the focus of a reality television series American Chopper on Discovery Channel in 2002.
Links: pauljrdesigns.com
9,728 views