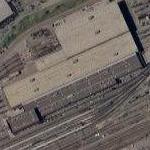 All of this work, and more, is going toward a project that will house some of the most high-tech railroad equipment found in the United States. One side of the building will be dedicated to a sophisticated, computer controlled, wheel-true machine, a large metal lathe that re-profiles the wheels while they are still on the car. Technicians will have at their disposal the latest in computer-based diagnostic equipment. This will help maintenance technicians diagnose problems with the various systems incorporated in the cars, like computer controlled hydraulic tilt systems (a feature that will allow the trains to negotiate curves at higher speeds than present), state of the art lighting and communication systems, and the electronics that will control the locomotives themselves. When you look up, you will see a 30 ton bridge crane for moving heavy equipment. Look down, and you will see devices incorporated into the rails known as Split-Rail Drop Tables. A car wheel assembly can be positioned over these mini-elevators, unbolted from the carbody, and lowered. Then a new assembly can be wheeled into position and raised. Seven such tables will be in place. In the part of the building where traction motors for the locomotives will be replaced, a much larger version of the drop table will be used.
Links: www.railfaneurope.net
991 views