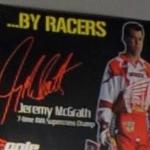 By kuressaare @ 2013-02-07 09:17:39
@ 36.114063, -115.200033
Las Vegas, Nevada (NV), US
Jeremy McGrath (born November 19, 1971 in San Francisco, California) is one of the most popular American Motocross/Supercross champions in the history of the sport. He was most active in the 1990s earning the title the "King of Supercross." His tricks during jumps on the supercross track, the most famous of which he called the "Nac Nac", helped spawn the sport of freestyle motocross. McGrath was AMA Pro Athlete of the Year Award in 1996. Still competitive in Motorcycle racing, he has tried his hand in many types of motorcycle competition. Lately he has expanded into off-road trucks in the Pro 2WD division of the LOORS Series and occasionally tries his hand at stock car racing. Jeremy lives in Southern California with his wife Kim and daughters Rhowan and Bergen.
Links: en.wikipedia.org
557 views