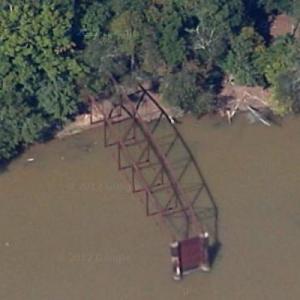 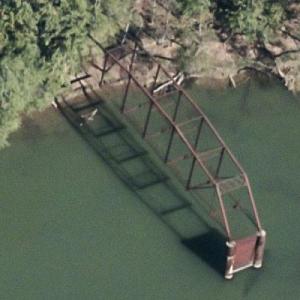 By kkeps @ 2008-11-23 11:42:06
@ 34.00164545, -84.23424636
Norcross, Georgia (GA), US
The steel-girdered bridge once traversed the Chattahoochee at what is now Jones Bridge Park. Opened to traffic in 1904, the bridge operated until the Depression, when officials in north Fulton County, on the other side of the river, fretted about the bridge's safety. They wanted to install new wooden flooring. Gwinnett County officials balked, and the bridge was closed and barricaded. Then, during the steel shortages of World War II, thieves with trucks and a crane dismantled and hauled off parts of the bridge, according to county historians. Residents, told the bridge had been bought as scrap, apparently figured anyone with all that equipment and working that hard couldn't be crooks. The larcenous crew carted away half of the bridge before disappearing. The part of the bridge left behind stands still, rusting in the river.
Links: www.atlantatrails.com, patch.com
2,004 views