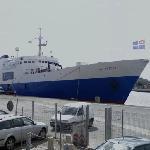 The Joseph Roty II was then converted for a new type of production. It is now the only European boat equipped for the production of surimi-base. This factory freezer trawler-90 m long, makes several times a year to a campaign of blue whiting fishery in the North Atlantic.

She suffered in 2004 a new overhaul to modernize its production facilities of surimi-base and was repainted in the colours of the Compagnie des Pêches Saint-Malo, new name for Comapêche.
Links: www.bateaux-de-saint-malo.com
470 views