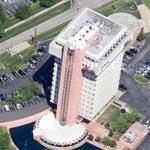 By kkeps @ 2014-01-26 18:36:04
@ 38.22846, -85.63934
Louisville, Kentucky (KY), US
Kaden Tower is a 15-story office building at 6100 Dutchmans Lane in suburban Louisville, Kentucky. The building opened in 1966 as the headquarters for Lincoln Income Life Insurance Company and was originally named Lincoln Tower. Designed by a student of Frank Lloyd Wright, the building is notable for its cantilevered structure and its suspended lacework facade. A single-story building on the same site and in the same architectural style adjoins the tower. This smaller building which originally housed a branch office of Liberty National Bank and Trust Company is now leased by WBKI-TV.
Links: en.wikipedia.org
1,054 views