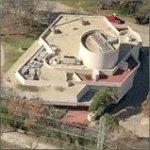 WacoKidd110
@ 2011-05-05 13:53:21
The monolithic concrete building was a combination of curved and angular forms typical of Wright’s late-period public projects. The vertical cylindrical forms of the four-and-a-half story building, encircled by horizontal cantilevered decks, presented a sculptural façade, both monumental and dynamic, within a wooded park setting. The entire building was based on a 60/120-degree equilateral parallelogram, such that there were no right angles. The unit-system organized not only the floor plan, but also many of the details from the smallest design of the window shapes to the facetted columns and the built-in furniture.