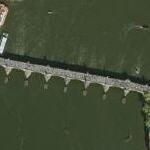 By DonMartini @ 2006-02-17 03:41:10
@ 50.086425, 14.41182
Prague, Czech Republic (CZ)
As the most picturesque and well-known of Prague's Vlatava crossings, the Charles Bridge is also the oldest by around four hundred years. Built to replace the wooden Judith Bridge (most of which had been swept away by a major flood in 1342), the Karlův most makes use of its predecessor's original bridgeheads in a pleasing, typically Bohemian design. Commissioned by King Charles IV (hence the name) and designed by the royal architect of the age, Peter Parlěř, the bridge was a masterpiece of engineering for the time. Taking more than 60 years to build, the bridge's foundation stone was laid in 1357, with the final structure being completed in 1420.
Links: en.wikipedia.org
1,270 views