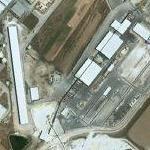 By kjfitz @ 2010-02-02 14:46:07
@ 31.47406, 34.476085
Nahal Oz, Israel (IL)
The Karni Crossing is a cargo terminal on the Israeli Gaza Strip barrier. It is located in the north-eastern end of the Gaza Strip and was built in 1993 in order to allow Palestinian merchants to export and import goods. The Karni Crossing was also used by the residents of Netzarim since the Karni road was the only route to that isolated Israeli settlement on which Jewish travel was allowed after the 1994 implementation of the Oslo Accords. Unlike the Erez Crossing, which is managed by the Israel Defense Forces, Karni is managed by the Israel Airports Authority.
Links: en.wikipedia.org
715 views