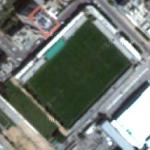 It was again bombed on November 17, 2012 by the Israeli Defence Force as part of Operation Pillar of Cloud. It claimed that the stadium was used by Hamas to launch rockets targeting Israel
Links: en.wikipedia.org
525 views