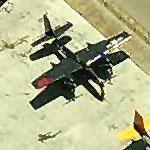 By Pdunn @ 2007-03-07 09:57:33
@ 33.831728, -116.505116
Palm Springs, California (CA), US
Unusual for a fighter, the Tigercat was designed for use aboard larger Midway-class aircraft carriers. Sped into production before the first prototype flew, the Tigercat was intended as a close air support aircraft in the later stages of WWII for the numerous landing operations underway in the Pacific. However, after VJ-Day, their production was halted, resulting in no Tigercats seeing action during WWII. Of the fewer than 100 built, today only six remain airworthy.
Links: www.warbirdalley.com, www.flickr.com
2,409 views