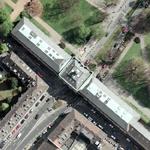 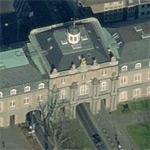 By DonMartini @ 2006-04-07 04:18:14
@ 50.734715, 7.105699
Bonn, Germany (DE)
The archway over the street towards Koblenz, which was erected as part of the gallery wing of the electoral castle, originally served as the assembly room of the order of knighthood of the holy Michael. A gold-plated figure of the archangel consequently decorates the façade.

The gate was erected from 1751 – 57 on the orders of Elector Clemens August according to the plans of Francois Cuvillés d.Ä. by M. Leveilly, Bonn’s municipal architect, as the seat of the St. Michael Order. In its lateral passages there were guard and customs rooms in former times. Quite remarkable are the emphasized Dorian and Ionic double columns, which impart the gate a very special and representative character in connection with the electoral arms cartridge. The gate’s upper part displays the personifications of the four virtues of the St. Michael Order, which are religiousness, perseverance, strength and faithfulness, as well as the gold-plated archangel Michael in the centre.

The figures are reproductions, as the originals were destroyed during the war. The original figure of the archangel Michael, which is a gold-plated lead casting of Hendrik Rottermondt (1755), is located in the interior of the university right at the lecture hall VIII.
694 views