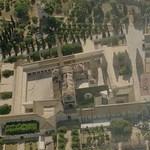 By DonMartini @ 2007-03-31 03:12:18
@ 37.398566, -6.007182
Seville, Spain (ES)
The Cartusian monastery of Santa María de las Cuevas is situated on the right bank of the Guadalquivir river. Due to the abundance of clay, numerous pottery kilns were installed during the Almohad dynasty of the 12th century. On these grounds a Cartusian monastery was built in the 15th century with the name of Santa María de las Cuevas (Caves).

In 1810, during the invasion of Napoleon's troops, the monks were driven out of the monastery and it was taken over by the French soldiers as the military barracks.

Abandoned and damaged, the monastery was bought over in 1839 by the English merchant, Charles Pickman, who would set up an earthenware and porcelain factory in 1841. Numerous Chimney stacks and Kilns were constructed, five of which still remain to thence determine the aesthetic characteristics of the monastery. The factory continued active at the site up till 1982.

Today the Cartuja hosts the Museum of Contemporary Andalusian Art.

Coming from the center of Seville, pass over Pasarela bridge and enter from the backside of the building through the Main Entrance.

Christopher Columbus lived in the Cartuja monastery for several years. This fact influenced the decision, that the Cartuja peninsula would be the site of the 1992 World Exhibition (22) Expo '92.
Links: lacartujadesevilla.com
649 views