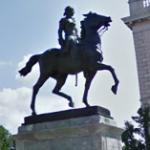 "A portrait a young debonair Lafayette astride his horse. Lafayette is dressed in his military uniform and holds his horse's reins with his proper left hand. The horse's proper right front hoof is raised and its tail blows in the wind as it trots forward. The sculpture rests atop a tall rectangular base with steps surrounding it."

"The Lafayette Monument was the subject of one of the most contentious sculpture debates ever in Baltimore. In 1919, landscape architect, Thomas Hastings, of Carrere and Hastings, who was hired to relandscape Mt. Vernon Place decided to install the new Lafayette sculpture south of the Washington Monument where it stands today. Many objected to this site because such a large sculpture and base, it was thought, would block the view of the Washington Monument from the south. Despite the criticism, Hastings prevailed and the sculpture was installed as planned on September 6, 1924, the anniversary of Lafayette's birthday."
Links: siris-artinventories.si.edu
603 views