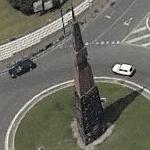 By adrbr @ 2008-02-16 18:20:11
@ 42.557308, 12.645374
Terni, Italy (IT)
The Lancia di Luce , known also as Obelisk, represents an example of industrial archaeology and was realized in 1995 by the sculptor Arnaldo Pomodoro. The idea to create the work, one of the maximum representations of the contemporary art, to Terni, it goes up again to about ten years before: the realization was hindered in fact from different misadventures and bureaucratic obstacles. The Lancia di Luce , tall 32 meters, are found in one of the most important and representative streets in the city, Raced of the People, and it dominates the whole surrounding area. This work represents the workmanship of the iron, from the raw subject up to the shine of the ended product, similar to that emanated by the light: it symbolizes therefore the job and the industrial zone of Terni. The intent of the sculptor has been that to give life to a work that integrated him and it represented the urban context and the reached technological finishing lines, often represented also through fractures, inserts, geometric forms and games of light. The Lancia di Luce introduces in fact strong contrasts between the shining surfaces and the lacerations and, despite both a work realized with industrial techniques, seems to postpone to a superior spirituality.
813 views