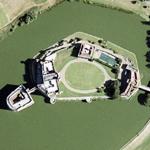 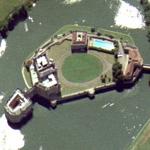 By dda @ 2007-06-23 06:57:10
@ 51.248768, .629643
Maidstone, United Kingdom (GB)
Built in 1119 by Robert de Crevecoeur to replace the earlier Saxon manor of Esledes, the castle became a royal palace for King Edward I of England and his queen, Eleanor of Castile in 1278. Major improvements were made during his time, including the Barbican, made up of three parts, each with its own entrance, drawbridge, gateway, and portcullis. The medieval keep is called the "Gloriette" in honour of Queen Eleanor.

In 1321 King Edward II besieged the castle after his queen was refused admission, and used ballistas, or springalds, to force its defenders to surrender. In 1395, King Richard II received the French chronicler Jean Froissart there, as Froissart described in his Chronicles.

Henry VIII transformed the castle for his first wife, Catherine of Aragon, and a painting commemorating his meeting with Francis I of France still hangs there. His daughter, Queen Elizabeth I was imprisoned in the castle for a time before her coronation.

The castle escaped destruction during the English Civil War because its owners, the Culpeper family, sided with the Parliamentarians. The last private owner of the castle was the Hon. Olive, Lady Baillie, a daughter of Almeric Paget, 1st Baron Queenborough, and his first wife, Pauline Payne Whitney, an American heiress. Lady Baillie bought the castle in 1926. She redecorated the interior, first working with Armand-Albert Rateau and then, later, with the Paris decorator Stéphane Boudin. Baillie established the Leeds Castle Foundation. The castle was opened to the public in 1976.

On 17 July 1978, the castle was the site of a meeting between the Egyptian President Anwar Sadat and Israeli Foreign Minister Moshe Dayan in preparation for the Camp David Accords.