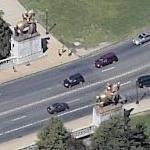 Flanking the eastern ends of the bridge and the parkway are two pairs of monumental neoclassical equestrian sculpture on identical pedestals. "The Arts of War" by Leo Friedlander stand at the end of the bridge. In "Valor" on the left (looking from the Lincoln Memorial), the male equestrian is accompanied by a female striding forward with a shield; in "Sacrifice" on the right, a standing female symbolizing the earth looks up to the rider Mars...The statues, approximately 17 feet tall atop their granite pedestals, are of gilded bronze. The pedestals each bear 36 gilded bronze stars representing the states of the Union at the end of the Civil War. The sculptors were commissioned in l925 and their designs approved in 1933, but the statues were not erected until 1951 after they were cast and gilded by Italy as a gift to the United States. The gilding was restored in 1971.
Links: www.nps.gov
809 views