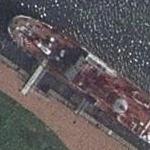 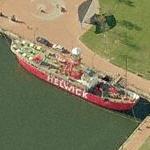 Weighing 550 tons with an overall length of 137 feet, the Helwick was built to withstand all the might of the sea. It took eleven people to crew the vessel with seven on board at any one time. In 1975 landing platforms were added so that the crews could be changed by helicopter.

A Lightship has no propulsion of its own because most of its life is at anchor; Helwick LV14 was towed by the tender THV Winston Churchill from the Swansea Depot.

In 1988 the churches in Cardiff were called together by the Cardiff Bay Development Corporation to discuss the role of Christianity in the bay area. The churches were seen as playing an important part in the community and should be involved at the very hub of the new developments. To this end Helwick LV14 was purchased and restoration begun to create a floating Christian Centre.
Links: www.lightship2000.co.uk
884 views