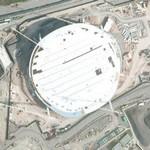 The funding for the Velopark was confirmed in February 2005 and the project was scheduled to go ahead whether or not London's bid for the 2012 Summer Olympics was successful. However, as London's bid for the Games was successful, the velodrome will be built with a spectator capacity of 6,000 rather than 1,500 seats that it would otherwise have had. The other facility at the site which will be used for the Olympics is the outdoor BMX racing track, which will also have a spectator capacity of 6,000.
Links: en.wikipedia.org
911 views