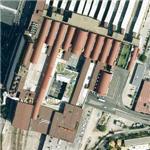 It hosts the railway networks connecting Madrid and the north-western Spain, the AVE (high speed line) from Madrid to Segovia and Valladolid, and Cercanías lines (commuter rail). There are also connections with Atocha station. Under the railway station there is a Metro Station (Chamartin) linking with lines 1 and 10 of the Madrid Metro, for travelling to Madrid city centre.

Placed over the Chamartín Station is the Hotel Chamartín.
Links: en.wikipedia.org
917 views