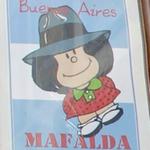 By adrbr @ 2013-06-10 13:38:30
@ 39.480653, -0.393921
Valencia, Spain (ES)
Mafalda is a comic strip written and drawn by Argentine cartoonist Joaquín Salvador Lavado, better known by his pen name Quino. The strip features a 6-year-old girl named Mafalda, who reflects the Latin American middle class and progressive youth, which is concerned about humanity and world peace and rebels against the world bequeathed by their elders. The strip ran from 1964 to 1973 and was very popular in Latin America, Europe, Quebec, and in Asia, leading to two animated cartoon series and a book.
Links: en.wikipedia.org
409 views