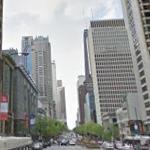 By kjfitz @ 2010-03-06 13:27:19
@ 41.891079, -87.62425
Chicago, Illinois (IL), US
The Magnificent Mile is the portion of Michigan Avenue in Chicago, Illinois extending from the Chicago River to Oak Street in the Near North Side community area. The district is located adjacent to downtown; it is also one block east of Rush Street, which is known for its nightlife. The Magnificent Mile serves as the main thoroughfare between Chicago's Loop business district and its Gold Coast. It also serves as the western boundary of the Streeterville neighborhood.

Real estate developer Arthur Rubloff of Rubloff Company gave the nickname to one of the city's most prestigious residential and commercial thoroughfares in the 1940s. Currently, Chicago's largest shopping district, various mid-range and high-end shops line this section of the street and approximately 3.1 million square feet is currently occupied by retail stores, restaurants, museums and motels. It includes fine restaurants, hotels, and stores and several of the tallest buildings in the United States. In addition, numerous prestigious buildings are located along the Magnificent Mile, such as the Wrigley Building and the John Hancock Center, places listed on the National Register of Historic Places such as The Old Chicago Water Tower District and Chicago Landmarks such as Tribune Tower and the Allerton Hotel. Formerly, the headquarters for Bebe was located here as well.
Links: en.wikipedia.org
1,560 views