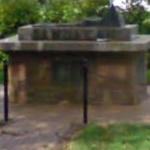 By the end of 1944, when allied forces were within striking distance of Sandakan, the Japanese command ordered the removal of prisoners inland to Ranau 165 miles (265 kilometres) west. On 29 January 1945, 470 prisoners guarded by 500 Japanese marched towards Ranau. Those unable to carry on were killed.

Of the 288 prisoners left at Sandakan there were no survivors.

On 1 August 1945, the surviving 22 prisoners at Ranau were massacred. Six who escaped were rescued by special forces.

This memorial honours those men who enlisted from the Hunter Region of New South Wales.

We Will Remember Them.