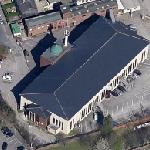 By Mike1989 @ 2013-04-08 02:10:03
@ 53.681119, -1.62809
Savile Town, United Kingdom (GB)
The Markazi Masjid (Central Mosque), also known as the Dewsbury Markaz or Dar ul Ulum (House of Knowledge), is a mosque in the Savile Town area of Dewsbury, West Yorkshire. Accommodating up to 4,000 worshippers, it is one of the largest mosques in the United Kingdom and among the biggest purpose-built mosques in Europe. It is also the European headquarters of the Tablighi Jamaat movement, and houses the Institute of Islamic Education (Jamia Talimul Islam), an independent day and boarding faith school for boys aged 13–19 and one of the two main Islamic seminaries in the UK. The mosque serves as a centre for Tablighi Jamaat's missionary activity throughout Europe.
Links: en.wikipedia.org
396 views