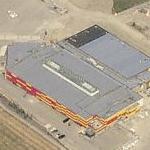 By Lamos @ 2008-03-06 11:44:11
@ 51.042222, -114.003611
Calgary, Canada (CA)
The Max Bell Arena was the site of the demonstration sport of curling and the demonstration event of short track speed skating. Originally, plans called for curling to be held at the Stampede Corral and then later at the Calgary Curling Club. Short track speed skating was originally slated to be held at the Olympic Oval. However, this fast-paced demonstration event would eventually be moved to Father David Bauer Olympic Arena before the third and final venue selection of the Max Bell Arena was adopted. The Max Bell Arena is located in southeast Calgary approximately 15 minutes travel time from the Main Press Centre (MPC). It has a regular seating capacity of 2121 plus 30 seats for handicapped spectators and 1080 seats were added to bring the total seating capacity to 3200. The arena's ice surface is National Hockey League (NHL) size measuring 25.9 x 60.9 m. The principal access to the seating area is from the upper concourse. Food concessions and public washrooms are located in the front lobby and the second floor lobby at the south end of the building. As curling and short track speed skating require vastly different ice surfaces, it was necessary to begin and complete the entire schedule of events for each sport at one time, with curling starting first. Curling competitions required the installation of several sheets of specially marked ice measuring 44.5 x 4.3 m. Short track speed skating required the installation of a 111-metre oval laid out on the surface of the Max Bell Arena's NHL size ice rink. The majority of upgrading to this facility for use during the XV Olympic Winter Games concerned modifications to the air handling system, ice plant, the addition of a VIP banquet room, additional washrooms, storage areas and concessions and an improved sound system. Total cost of upgrading projects at the Max Bell Arena was $1 million. OCO'88 provided $400 000 in funding while the City of Calgary and the Max Bell Society, the owner and operator of the arena, each provided $300 000.
Links: en.wikipedia.org
1,104 views