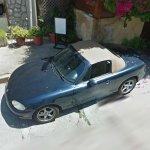 "Fire crews discovered a Mazda Miata on fire, and the blaze spread to a balcony and the front of the house, officials said."
Links: latimesblogs.latimes.com
846 views