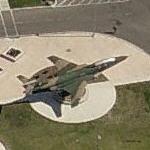 By kjfitz @ 2007-08-01 10:20:48
@ 39.499277, -119.777169
Reno, Nevada (NV), US
The McDonnell F-101 Voodoo was a supersonic military fighter flown by the USAF and the RCAF. Initially designed as a long-range bomber escort (known as a penetration fighter) for the Strategic Air Command, the Voodoo served in a variety of other roles, including the fighter bomber, all-weather interceptor aircraft and photo reconnaissance roles. Reconnaissance Voodoos saw extensive service during the Vietnam War.

In the early 1970s, a batch of 22 ex-RCAF CF-101Bs were returned to the USAF and converted to RF-101B reconnaissance aircraft with their radar and weapons bay replaced with a package of three KS-87B cameras and two AXQ-2 TV cameras. An in-flight refueling boom receptacle was fitted. These aircraft served with the 192nd Tactical Reconnaissance Squadron of the ANG through 1975. They were expensive to operate and maintain and had a short service life.
Links: www.airliners.net
996 views