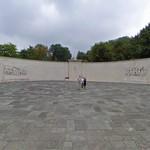 4,140 Danes fell during the war and all are remembered here by name.

Some have found their final resting place in German War Cemeteries in France and Belgium. 75 in the Danish War Cemetery in Braine, France. Some were exhumed and reburied in Denmark.