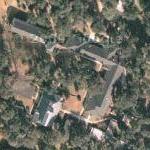 The area has been known as Mepkin for centuries, and was originally the estate of several historic families. The first record of the name was a 1681 grant to the sons of Sir John Coleton, one of the Lords Proprietary of South Carolina. In 1762 one of his descendants sold the land to Henry Laurens of Charleston. Laurens built his home there, and it was known as the Mepkin Plantation.

After a few generations, the Laurens family sold the property, and it passed through several hands. In 1936 the well-known publisher Henry R. Luce bought the property. His wife, Clare Boothe Luce, commissioned and built an extensive landscape garden known as the Mepkin Garden. Then in 1949 the Luces donated a large part of the property including the garden to the Trappist Order's Gethsemani Abbey for its use.

Twenty-nine monks of the Order of Cistercians of the Strict Observance (Trappists) came from Gethsemani, Kentucky to found the new Mepkin Abbey. With a few limitations, the Abbey and the Mepkin Gardens are open to the public on a daily basis. The monastery grounds include a graveyard containing the ashes of Henry Laurens, as well as the graves of John Laurens, Clare Boothe Luce and her husband, the publisher, Henry. Its gardens are now known as the Mepkin Abbey Botanical Garden.
Links: en.wikipedia.org
907 views