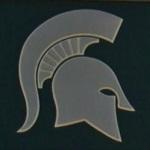 By tallturtle82 @ 2015-12-22 12:35:41
@ 42.7293845, -84.4839968
East Lansing, Michigan (MI), US
In the 19th century Michigan State, an agricultural college were known as the "Aggies". By 1925 the school had expanded beyond agriculture and began searching for a better choice. The college held a contest to choose a new team name. The name "Staters" gained traction early on, but two sports writers, George S. Alderton, of the Lansing State Journal, and Dale Stafford, sportswriter for the Lansing Capitol News searched for a better choice. They settled on Spartans and the name has stuck ever since.
Links: www.msuspartans.com
417 views