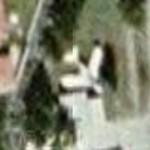 By Dania @ 2010-09-28 17:04:25
@ 48.650584, 18.808602
Kosorin, Slovakia (SK)
The Mikoyan-Gurevich MiG-15 (Russian: Микоян и Гуревич МиГ-15) was a jet fighter developed for the USSR by Artem Mikoyan and Mikhail Gurevich. The MiG-15 was one of the first successful swept-wing jet fighters, and it achieved fame in the skies over Korea, where early in the war, it outclassed all straight-winged enemy fighters in daylight. The MiG-15 also served as the starting point for development of the more advanced MiG-17 which was still an effective threat to supersonic American fighters over North Vietnam in the 1960s.

The MiG-15 is believed to have been one of the most widely produced jet aircraft ever made, with over 12,000 built. Licensed foreign production perhaps raised the total to over 18,000. The MiG-15 is often mentioned along with the North American F-86 Sabre in lists of the best fighter aircraft of the Korean War and in comparison with fighters of other eras.