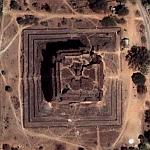 Just to the north of the paya hangs the Mingun Bell, said to be the world's largest uncracked, 5m wide at the base and about 4m high. Visitors are welcome to stand inside it while someone on the outside gives it a bonk or two.

Other Buddhist temples and shrines dot the area. Reachable by a short boat ride up the Irrawaddy from Mandalay, 10km away.
Links: en.wikipedia.org
1,171 views