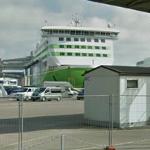 Star was the first fast ferry capable of around-the-year service used on the Helsinki–Tallinn route. The ship's design is heavily based on that of MS SeaFrance Rodin, built by Aker Finnyards for SeaFrance in 2001. Originally it was reported the Star would have no passenger beds, but later specifications included beds for 520 passengers, meaning that the ship can offer short overnight cruises to Tallinn as well as a transportation service during the day.[citation needed] The green external livery of the ship is according to Tallink promotion material "meant to reflect the environmentally friendly aspects of the ship's design".

Star has three daily departures from both Helsinki and Tallinn, with one crossing taking two hours. In Tallink marketing, Star has often been referred to as "Tallink Star". The ship's planned original delivery date was 5 April 2007, but this was postponed until 12 April 2007, owing to problems with the main engines.
Links: en.wikipedia.org
480 views