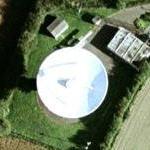 By kjfitz @ 2010-10-26 14:53:04
@ 52.790304, -2.997163
Knockin, United Kingdom (GB)
The Multi-Element Radio Linked Interferometer Network (MERLIN) is an interferometer array of radio telescopes spread across England. The array is run from Jodrell Bank Observatory in Cheshire by the University of Manchester on behalf of STFC as a National Facility.

The array consists of up to seven radio telescopes and includes the Lovell Telescope, Mark II, Cambridge, Defford, Knockin, Darnhall and Pickmere (previously known as Tabley). The longest baseline is therefore 217 km and MERLIN can operate at frequencies between 151 MHz and 24 GHz. At a wavelength of 6 cm (5 GHz frequency), MERLIN has a resolution of 40 milliarcseconds which is comparable to that of the HST at optical wavelengths.
Links: en.wikipedia.org
503 views