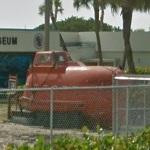 The lifeboat is currently an exhibit at the National Navy UDT-SEAL Museum.
Links: en.wikipedia.org, www.meba.us
560 views