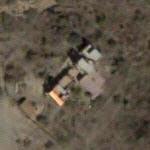 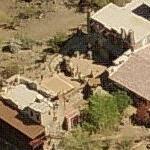 By kjfitz @ 2005-08-23 13:11:21
@ 33.356511, -112.06236
Phoenix, Arizona (AZ), US
The Mystery Castle is a Phoenix landmark, built by the semi-reclusive Boyce Luther Gulley, who, having contracted tuberculosis, abandoned his wife & daughter in Washington state, reappearing in Phoenix in the 1930s. He settled on the side of South Mountain, near the site of what was then the town dump. From there he salvaged building materials, to build the castle he had always promised his young daughter. He ended up living a lot longer than he thought he would, so, room by room, the castle got larger & larger. Upon his death, Gulley's wife and daughter finally found out what had become of him and came to Phoenix. They discovered what he'd been up to in the years since their parting, liked it, and moved in. Mary Lou Gulley still lives in the castle to this day, giving tours of "Daddy Gulley's" castle. Talking to her makes it possible to imagine a better Phoenix, one without all the hundreds of thousands that have poured into this valley in the decades since Boyce Luther Gulley lived in his Castle. (deuceofclubs.com)
Links: phoenix.a-zguides.com
2,598 views