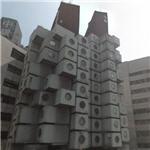 Completed in 1972, the building is a rare built example of Japanese Metabolism, a movement that became emblematic of Japan's postwar cultural resurgence. The building was the world's first example of capsule architecture built for actual use. The building is still in use as of 2009 but has fallen into disrepair.
Links: en.wikipedia.org, www.atlasobscura.com
1,263 views