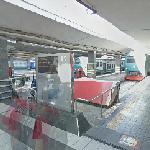 By Mike1989 @ 2013-11-27 03:28:46
@ 40.852981, 14.272891
Naples, Italy (IT)
Napoli Centrale (Naples Central Station) is the main railway station in the city of Naples and in southern Italy and the sixth largest station in Italy in terms of passenger flow with an annual ridership of 50 million. It is located next to Piazza Garibaldi to the east of the old city. It is the primary rail terminus and station for Naples, and serves Trenitalia national railways,EAV and has an underground section known as Stazione di Napoli Piazza Garibaldi (Naples Garibaldi Piazza station), which is served by the metropolitan trains of the line 2.
Links: en.wikipedia.org
909 views