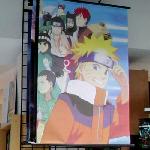 By Mike1989 @ 2013-05-15 04:50:51
@ 40.968414, -5.662425
Salamanca, Spain (ES)
Naruto (NARUTO—ナルト— NARUTO?) is an ongoing Japanese manga series written and illustrated by Masashi Kishimoto. The plot tells the story of Naruto Uzumaki, an adolescent ninja who constantly searches for recognition and dreams to become the Hokage, the ninja in his village who is acknowledged as the leader and the strongest of all. The series is based on a one-shot comic by Kishimoto that was published in the August 1997 issue of Akamaru Jump.

Directed by Hayato Date and produced by Studio Pierrot and TV Tokyo, the Naruto anime adaptation premiered in Japan on TV Tokyo October 3, 2002, and ran for 220 episodes until its conclusion on February 8, 2007.