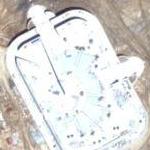 By kkeps @ 2011-12-15 11:31:40
@ 40.344205, 49.845378
Baku, Azerbaijan (AZ)
National Flag Square (Azerbaijani: Dövlət Bayrağı Meydanı) is a large city square off Neftchiler Avenue in Bayil, Baku, Azerbaijan. A flag measuring 70 by 35 meters flies on a pole 162 meters high which had been confirmed as the world's tallest by the Guinness Book of Records until being overtaken by the 165 meter flagpole of Dushanbe, Tajikistan, built by the same American designer, David Chambers.

The upper part of National Flag Square embraces three hectares and overall the square covers 60 hectares. The square features the state symbols of Azerbaijan (the coat of arms and the anthem) and the map of the country.
Links: en.wikipedia.org
1,162 views