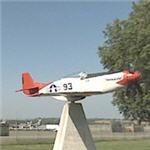 In 1948, the designation P-51 (P for pursuit) was changed to F-51 (F for fighter) and the existing F designator for photographic reconnaissance aircraft was dropped because of a new designation scheme throughout the USAF. Aircraft still in service in the USAF or Air National Guard (ANG) when the system was changed included: F-51B, F-51D, F-51K, RF-51D (formerly F-6D), RF-51K (formerly F-6K), and TRF-51D (two-seat trainer conversions of F-6Ds). They remained in service from 1946 through 1951. By 1950, although Mustangs continued in service with the USAF and many other nations after the war, the majority of the USAF's Mustangs had been surplussed or transferred to the Air Force Reserve (AFRES) and the Air National Guard (ANG).
Links: en.wikipedia.org
1,830 views